Pro footballer Miller Quinton would do anything for his best friend and teammate—including “fake dating” his friend’s sister. What no one knows is that seven months ago in Vegas, Miller and Kinsey did a whole lot more than just kiss. Miller knows that this cheerleader is off-limits to him and any guy on the team. Still, he can’t stop himself.

Kinsey’s whole world is on the verge of crumbling. Her dad has cancer. Her overprotective brother is falling apart. Dating Miller may be a fake-out, but he’s the one guy who can make her forget about everything—including all the reasons she stayed away from football players. With each heated moment, Miller feels more like a safe place…even though he’s not safe at all.

Now temptation is testing every rule in the game of love. But how long can they go on playing when winning is a harder goal than either of them imagined?

[[I recieved an arc from NetGalley for an honest review]]

Kinsey Romonov, head chearleader for the Bellevue Bucks, is a spitfire with an over the top protective brother. She has overcome alot in life and just wants to be able to do her own thing. Her brother Jax has made her off limits to his teammates,but after a steamy night in Vegas that might be a problem.

Quiton Miller, Jax’s best friend and teammate, has it bad for Kinsey. Miller considers his friends his family and would do anthing for them.  He doesn’t know if he can risk opening up his heart to Kinsey with his friendship on the line and his heart has already been through so much in the past.

When Jax realizes he has too much on his plate he asks Miller to fake date Kinsey so he has one less thing to worry about. Miller agrees becuase he can’t let his friend down and he hasn’t been able to stop thinking of Kinsey since Vegas. Kinsey agrees becuase she can’t say no to her brother and can’t resist her pull towards Miller.

“A girl with brown hair, mesmerizing eyes, and the ability to cut a man down without even using her words.” 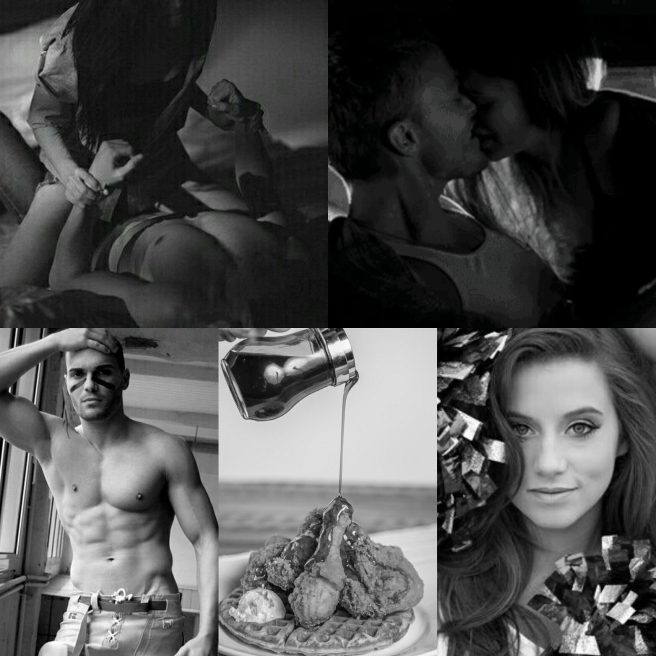 “…the hottest tight end with a tight end made for sin … I’d seen that tight end up close and personal— they had no idea the type of sinning a girl would do when faced with that— and his perfect lips. I shivered then mentally strangled myself until my mental self lost all consciousness.”

Miller and Kinsey both have to work on personal issues, insecurities and honesty in order to find out if they can be more than friends and do more than fake date.

Infraction by Rachel Van Dyken had everything! It was fun, sexy, and more emotional than I expected. I will admit I shed more than a few tears but I would read it all over again in a heartbeat.  If you haven’t read Fraternize, the first book in the Players Game series, you can grab yourself a copy here!!