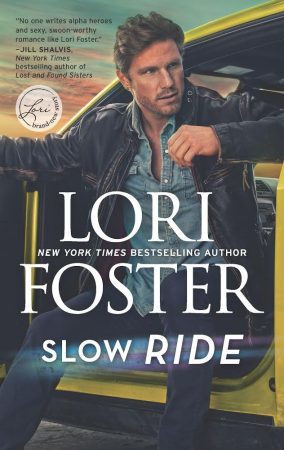 You can’t put the brakes on love…

Ronnie Ashford needs a distraction. In the morning, she has to offer arrogant, conventional Jack Crews a job and convince him not to take it. She doesn’t need anyone’s help, thank you very much. But tonight is all about the tall, sexy stranger who just walked in the bar—and all the delicious trouble they could get into together. Too bad just as things are heating up between them, he whispers the three little words that destroy everything: “I’m Jack Crews.”

Jack is determined to connect with fiery Ronnie—in bed and out of it—but her terms are clear. If he takes the job, helping her acquire prized artifacts for her mysterious bosses, anything between them is strictly off-limits. Somehow he has to convince a woman who’s never felt like she belonged that she’s found her place—with him. And with the danger sparking hotter than the fire between them, it’s going to be one unforgettable trip..

Slow Ride is the second book in Lori Foster’s Road to Love series. Each book can be read as a standalone but after you read this one you’ll want to go back and read the other brothers’ story.

“It would take time and effort to win her trust, but already he knew she’d be worth the effort.“

After being introduced to Jack Crew in the first book I was really looking forward to getting to know him better and oh boy he did not disappoint. Jack was such a gentleman, polite, charming, caring, protective and damn sexy. I loved everything about his characters, no complaints from me. However, Ronnie Ashford, took me a second to warm up to. That was just who she was though, she has gone through something traumatic and has set up walls of steel around herself. She uses attitude and aggression as a shield, and Jack is slowly able to break it down. When she opened up she was vulnerable, caring and lonely. Jack was the perfect man to break her out of her she’ll help her sees herself as the beautiful, strong and worthy of love.

“One day she’d been fending off literally everyone, and then boom. Jack Crews was in her life, refusing to leave, kissing her silly, making her smile.“

Overall, I really enjoyed Slow Ride by Lori Foster. The Crew brothers are great characters that I love reading about and I’m looking forward to the final book in the series.

“I could kiss you all day. Your mouth…I already feel like an addict.“

“She wanted to be here with him so badly it actually scared her. She wanted Jack. She Craved Jack.“

Learning Curve by NR Walker is the 6th standalone in the multiauthor Franklin U series. A steamy jock/nerd college romance between Cobby and Vincent who will steal your heart. A feel good steamy romance with bisexual rep, weightlifting metaphors, first kisses, friendship, tacos on the pier, nervous rambling, honesty, study sessions, make out sessions, and a happily ever after.  5⭐
My Favorite Reads of September!  I'm calling it a wrap on the month because I plan to spend The day watching scary movies . 🍁
Finished up my reread of the Trails of Fear series by Nicky James and ending my month with the Perfect Boys series by #KMNeuhold . 💙
I was putting together my monthly wrap up last night and realized I read zero shifter romances and that makes me sad. I need to fix that and find a handful to read for next month. 🐺
Happy Release Day to The Rivals of Casper Road by @roanparrish 🎉 The fourth stand alone in the Garnet Run series . An opposites attract romance between horror fan Zachary Glass and his new easily spooked neighbor. A sweet fall romance filled with family video calls, a spooky hayride, pumpkin carving, chainsaw carvings and doing what will truly make you happy. 🎃
Hazard & Somerset took over my weekend once again but I'm almost done with that anxiety inducing series and will be immediately starting Black by #QuinPerin (thank you @enajunca for putting this on ym radar) .  I figured #CozySunday is the perfect time to do the #ComfortChallenge which I saw @boooksbythewater do. 📚