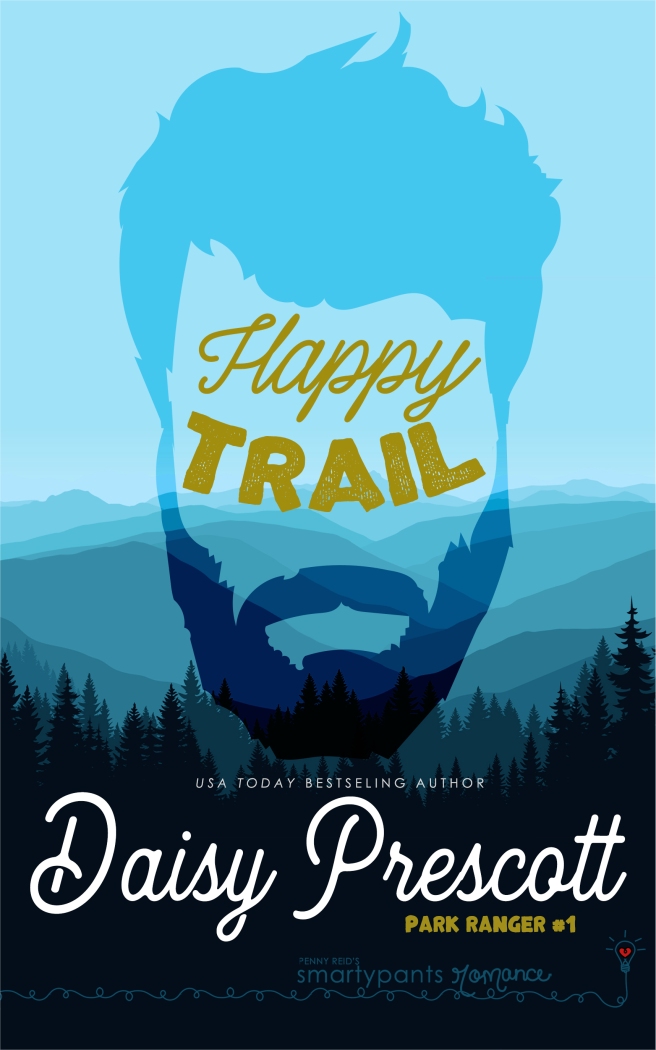 A man of few words, Ranger Jay Daniels values the calm, quiet solitude of the Great Smoky Mountains. Never quite fitting in with either side of his family, he prefers the company of birds and trees to people.

Yeah, he’d most definitely prefer a bird—any bird, any bird at all, take a vulture for instance—to the human-tornado hybrid that just blew onto his peaceful stretch of the Appalachian Trail.

The path of true love never has run smooth for Olive Perry. After getting dumped and promptly abandoned in the middle of her multi-month hike, Olive swears off men. Determined to finish the long trek by herself, she doesn’t need a prince—or broody and taciturn ranger—to save her.

Yet, when an early snowstorm threatens the mountains, and Ranger Daniels is charged with getting hikers to safety, that includes hot-tempered Olive Perry. Snowed in and forced to share an abandoned cabin, can Olive’s heated intensity melt Jay’s cool reserve?

And if so, will this happy trail lead to true love? Or will their time together be just another bump in the road?

‘Happy Trail’ is a full-length contemporary romantic comedy, can be read as a standalone, and is book#1 in the Park Ranger series. “Can we drop the pretense of not being trapped on the wrong side of the fence with whatever bloodthirsty beast is making such a sound?” I squint into the distance, hoping narrowing my eyes will give me super strength vision.

It doesn’t. I step behind Ranger Daniels for protection.

“What are you doing?” He twists his neck to look down at me.

“Hiding. I believe you took an oath to protect and serve.”

“Pfft. You’re confusing me with a police officer. I’m here to engage, educate, and empower.” He moves so he’s beside me.

“Sometimes. Do you see a holster now?”

I scan his hips and shake my head, allowing my eyes to linger on the tight fit of his uniform pants over his strong thighs and the thick belt at his narrow waist. Ranger Daniels is packing heat, but not of the pistol variety.

A distinct braying reaches my ears.

“What would a donkey be doing up here? Makes no sense.”

Maybe he plans to shoo away our attacker with it?

The gray form ambles toward us, letting out a loud bray and revealing large teeth.

“Should we be worried?” I’m standing behind Jay again.

“About a donkey? They’re mostly docile. He’s probably just curious.” Shifting his attention forward, he addresses our new friend. “Hey there. Where’d you come from?”

“And what will he do when he realizes we’re showing up to his house empty-handed?” I’m half mocking. In my world, not bringing a hostess gift is an unthinkable breach of etiquette. I have no idea about the social decorum for equines.

“Let’s go.” Jay encourages me forward with a sweep of his hat.

We take several steps and the donkey does the same without breaking eye contact, like we’re about to duel. There’s definitely a challenge, a mild threat in the eyes of our new foe.

“Should we slowly retreat to the fence?” I whisper at Jay’s back.

“Maybe he’s a guard donkey.” I slide a glance over my shoulder toward safety. We’re a dozen or so yards away, but it isn’t too late to make a quick escape.

“I’m a stranger in a strange land—anything’s possible.” I wait until he faces forward to stick my tongue out at him.

He’s shaking his head and clearly not paying attention to me anymore as he stomps across the squishy field.

My boot slips in the mud, or donkey poop—it’s impossible to tell the difference. I squawk and flail my arms as I tumble forward in an awkward motion resembling the mating dance of an emu.

The donkey’s ears prick up before flattening against his head.

“Uh oh,” I murmur as I straighten up.

Born and raised in San Diego, Daisy currently lives in a real life Stars Hollow in the Boston suburbs with her husband, their rescue dog, Mulder, and an imaginary house goat. When not writing about herself in the third person, Daisy can be found traveling, gardening, baking, or lost in a good book.

Happy Trail by Daisy Prescott is the first book in the Park Ranger series, which is part of the spin off series created in the Penny Reid Universe. This one takes place in the Great Smoky Mountains, Green Valley world.

“We come from two different worlds and have nothing in common. She’s a serial monogamist with commitment issues. I’m a loner with trust issues.“

Olive Perry is a socialite who joins her boyfriend on his hike on the Appalachian Trail until he decides to pop the question. Since she doesn’t love him and doesn’t want to be engaged for the 4th time she turns him down. He promptly leaves her on the trail, and she decides to see the journey through. When she’s so close to completing her adventure she crosses paths with solitary park ranger Jay Daniels. An incoming storm causes them to be snowed-in in a small cabin where they get to know each other and become friends of a sort. But when the snow clears reality comes calling for Olive, and she has to walk away from the man she’s started to fall for.

“He’s too nice. All I want to do is corrupt him. Make him fall in love with me.“

I really enjoyed Ranger Jay he was shy, socially awkward and charming, but sadly Olive’s character fell flat for me. She just seemed all surface and no depth. I appreciated how seamlessly Happy Trails fits into the Green Valley world, with little cameos from friendly faces. It completely stands on its own but has just enough to make jam session fans feel at home. Unfortunately I felt underwhelmed by the story itself, I appreciate a good slow burn but I feel like this could have benefited from a faster paced story line.