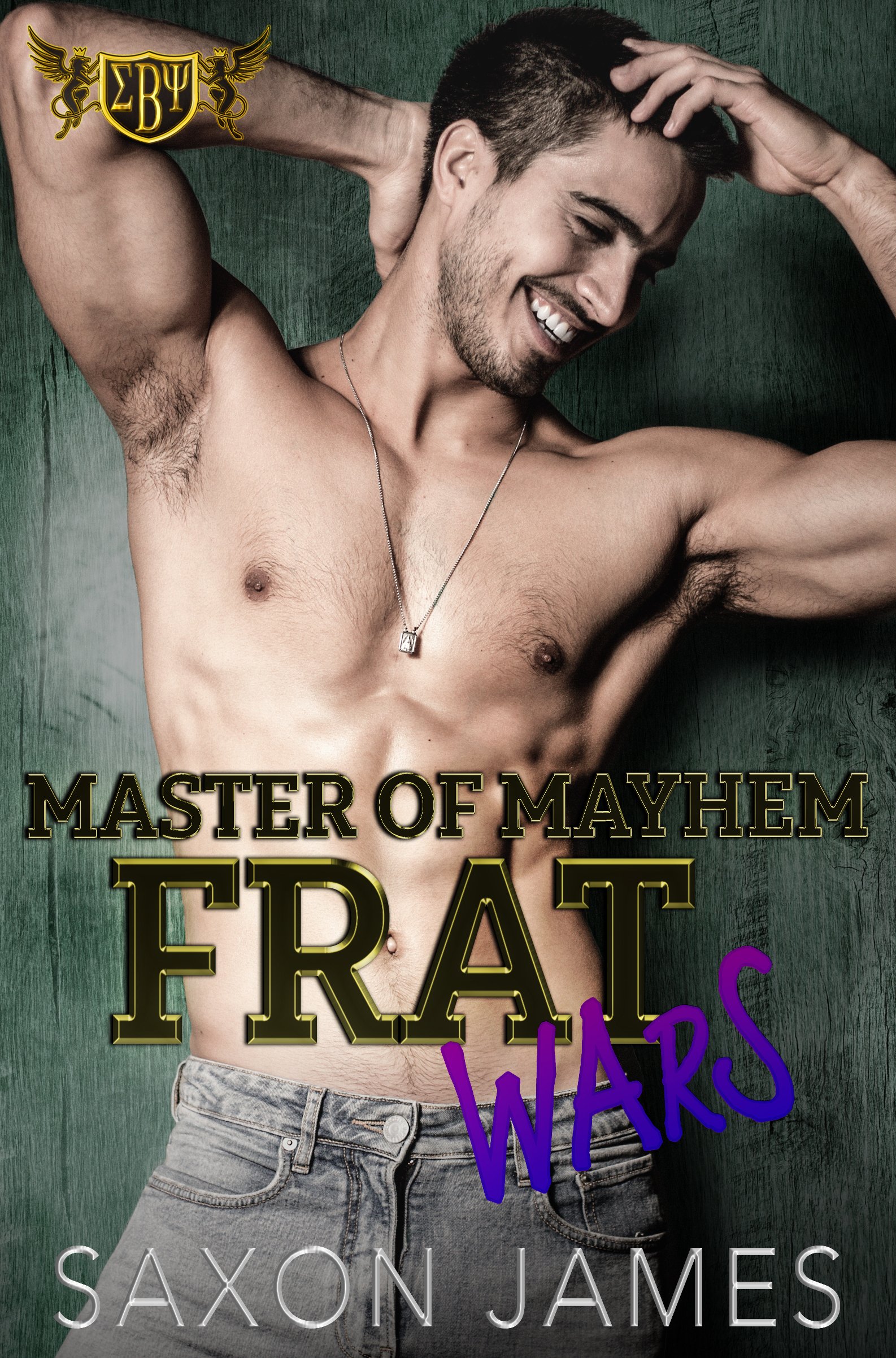 As social chair of Sigma Beta Psi, I’m the life of the party. It’s what I’m known for, and if it’s not fun, I’m not interested, simple as that.
I’m not someone who overthinks.
So when one of my brothers hooks up with a dude from another frat house, it catches me off guard when I can’t stop thinking about them … together.
There’s only one way for me to get this obsession out of my head and that’s by jumping in with both feet and putting it into practice.
The problem is, the one guy who’s up for the ride, is the last one I’d expect.

Being risk manager of a frat house is nobody’s idea of a good time. My brothers get annoyed when I put a damper on their plans, and wrangling drunken frat brothers isn’t how I pictured my Saturday nights of senior year.
I’m bored.
In a rut.
Study, frat duties, planning for the future.
When is it my turn to let loose for a moment?
So when my dumb-as-bricks frat bro is scoping out the house for a little experimenting fun, I throw out the offer like it isn’t the most nerve-wracking thing I’ve ever considered.
I never imagined I’d actually enjoy it. 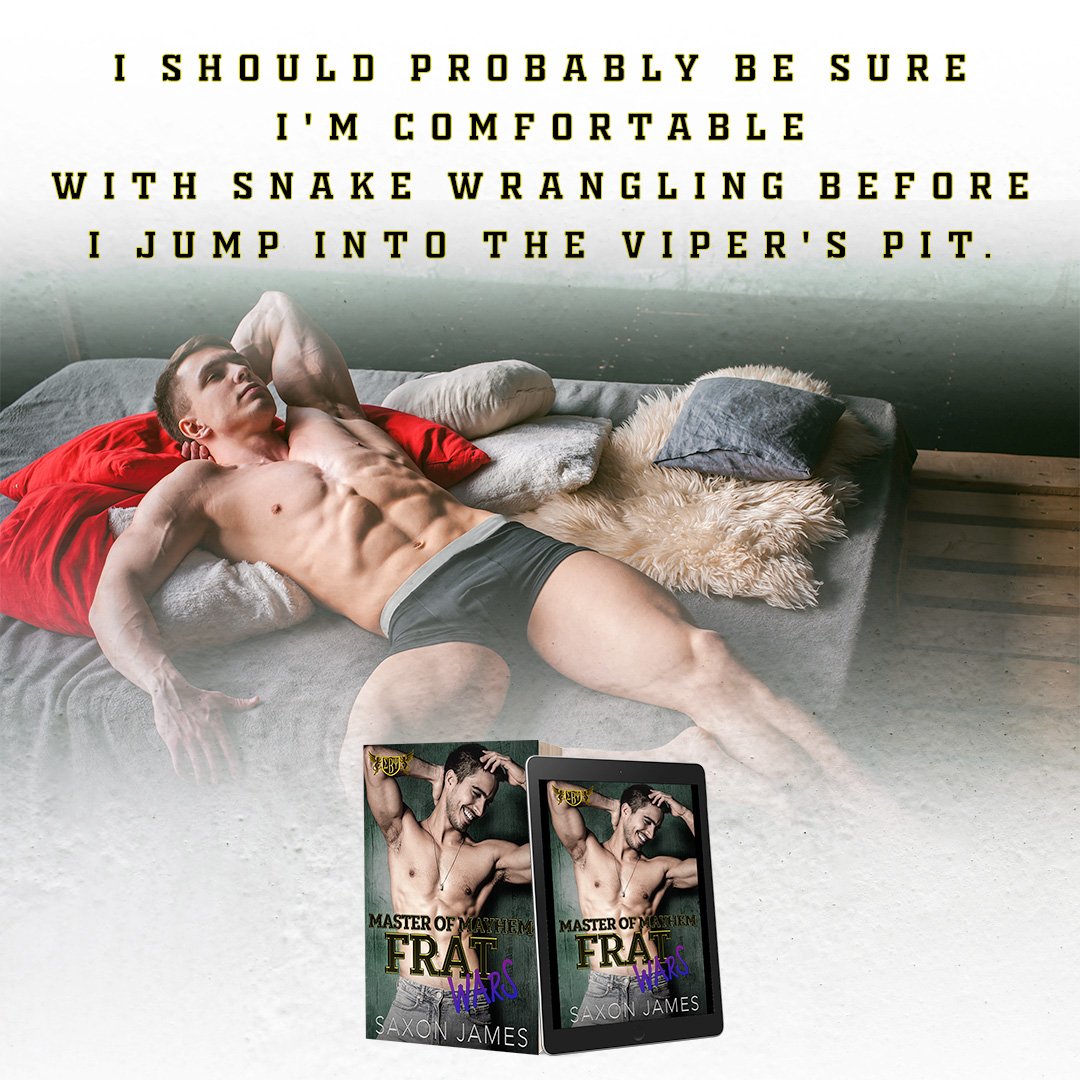 Frat Wars: Master of Mayhem by Saxon James is the second book in the Frat Wars series. Robbie is known for having a good time and doing just about anything for a laugh. Brandon is also all too aware of Robbie’s antics as the frat’s risk manager and one of the big guy’s best friends. When Robbie decides to broaden his sexual horizons he finds Brandon is the guy he wants to test these new waters with. What starts as harmless fun between two bros starts to morph into much more than either guy is ready to commit to. As they start to feel the pull of the future, what will that mean with each other?

Robbie is a big bear of a man with a heart of gold. You just have it make it through the jokes, pranks and shenanigans to find it. He cares so much about each of his brothers and making sure everyone has the best time when he’s around. He even manages to get his stick-in-the-mud friend Brandon to have fun with his antics. What starts off as harmless experimentation with Brandon takes on a life of its own for Robbie and he finds himself questioning not only his sexual preferences but his approach to commitment and love. While they burned down the bedroom with scenes of sexual exploration and fun, the little moments where Robbie goes out of his way to make sure Brandon is happy and safe really endear you to him.

His mouth is hot, his kisses hard. It’s both new and exciting and overwhelmingly familiar.

Brandon understands how important his job is to keeping the frat house running on campus. He manages the parties and pranks trying to keep everything to a dull roar, even Robbie. But he has this overwhelming feeling of missing out on the adventure of the last semester of college. Robbie’s experiment changes that for him as he steps out of his comfort zone and explores being intimate with a man for the first time. His attraction to Robbie catches him off guard but at the same time his frat brother has always been there either trying to keep him involved in the frat games or keeping him safe and healthy.

“No. We can stop kidding ourselves that this is nothing, because, I think it might be everything.”

This is a light hearted low angst college story about two frat brothers learning about themselves and each other through exploration and fun. That being said, the one caveat I have is that one of the brothers has a girlfriend at the start of their little experiment. She’s “totally cool” with them kissing as long as she’s there but does constitute cheating, I guess I’ll leave that up to each individual person as relationship boundaries are different for everyone. Other than that I did thoroughly enjoy Brandon and Robbie’s adventure. They were both loveable albeit extremely different characters and I think you can absolutely call this an opposites attract romance. I think these books being low angst is perfect because it’s light fun with goofy pranks and loads of sweet moments between two men never expecting