Hudson West is the enemy. Nico Shah is trouble. However, when they’re forced to collaborate on a town project, they can’t stop the passion from burning.

Hudson West is the enemy.

The calm, arrogant, stupidly hot owner of the rival restaurant in town never fails to push Nico Shah’s buttons. So when he and Hudson are invited to collaborate to cater the Chesapeake Days festival, he wants to say hell no. But with his mother’s upcoming transplant, he needs that money.

Hudson’s noticed the gorgeous, witty flirt and has veered far away. He’s looking for commitment while Nico’s looking for his next flavor of the night. Except now that they’re working together, neither can ignore the chemistry that’s one spark away from burning down a forest. And when they finally collide, the connection is beyond anything either has experienced.

But with Nico still terrified of the word “boyfriend” and Hudson needing someone who belongs to him, this can only end in heartbreak.

With the way this week had started out, Nico was two steps away from dousing the town in turpentine and tossing the match. Crumpling the paper in his fist, he tried to suck in a deep breath. Not like it did much to calm the artillery fire in his chest. Fucking asshole. He and Hudson West were going to have words. Some pithy, some sharp, and most of them unkind. Harbor Pointe loomed in front of him, all beige walls and hunter-green shutters on the quaint historic house. Wide windows allowed plenty of natural light in, and the patio on the side of the restaurant was full of the high-end patrons this place attracted. Honestly, he couldn’t stand clientele like that, but while he’d love to say good riddance, he couldn’t afford to. Not when they swarmed during the summer and made up a lot of Chesapeake City’s business. And right now, his pride and joy, Port of Call, needed any extra business it could get. Nico sucked in a deep breath and slid his Ray Bans off, hanging them from the center of his V-neck. He preferred to avoid Harbor Pointe at all costs and rarely paid an in-person visit, but this… this warranted one. Hudson West had been trouble from the moment he rolled into town a little over a year ago and started a restaurant good enough to compete with Nico’s, and it didn’t look like he showed any signs of easing up. Nerves. Settle them. Right. He strode toward the side entrance of the restaurant, wanting to keep this confrontation as private as possible. No need for any onlookers; that would be bad for his own business. He balled his hands into fists and then flexed his fingers, rinse and repeat, as the crisp freshwater breezes wound around him, the picture-perfect view visible from the patio. The servers looked like they’d been plucked out of a country club in their white polos and dark slacks, which worked just peachy for the rich assholes who frequented the place, owner included. Nico soaked in the pristine cloth napkins, hickory tables and chairs, and barely-there food against spotless white plates. Not for him in the slightest. He’d take his rowdy crowd of boozers at Port of Call any day. He ducked inside the restaurant, the slight chill of the air-conditioning prickling his skin. The lights were dim, gliding like gossamer over all the polished surfaces, since rich folks seemed to have an incessant need to view their own reflections. The paper in his hand was probably unreadable at this point from too many creases, but he’d brought it along to make a point, not be legible. He skimmed through the room that preached quiet elegance, even with a fair number of patrons dining inside. The bar sparkled with glassware, the back lined by top-shelf liquors, and there, amid it all, stood the man he’d been searching for. Hudson West was the epitome of preppy white boy with a square jaw, intense blue eyes, and thick, dirty-blond hair. Of course, the guy was built too, all well-defined arms, broad shoulders, and thighs that filled out his slacks far too well. Like Captain freaking America without any of the integrity. Fine, the man might also be stupidly hot, but even with Nico’s sloppy track record of one-night stands, he drew his line in the sand at pompous dickbags. And Hudson had proved to be a jackass from the first day they met. Nico made his way forward, mentally daring Hudson to glance his way. He was sure the irritation in his look alone would rip the guy a new one. Hudson’s gaze darted in his direction, those blue eyes darkening. Still, he didn’t bother to wave, nod, or acknowledge, just continued shaking and pouring an old-fashioned into the polished rocks glass. Basic politeness would be far too much of an effort. He handed the drink to a stiff-looking older guy sitting at the far end of the bar and returned to the center. Nico sucked in a breath and approached the bar, sliding onto the stool in front of Hudson. Hudson arched a brow. “I’m assuming you’re not here for a drink?” His rich, low voice dripped arrogance, something Nico had marked about the man from the start. Nico let out a snort. “Safe assumption. I like my martinis without the extra shot of condescension.” Hudson rolled his eyes. “We all know you’re allergic to a little class, Shah.” Nico’s jaw twitched. Asshole. “I’ll take personality over class.”

Fresh out of a relationship, Nate’s searching for a change—what better way is there than renovating his uncle’s old coffee shop in Chesapeake City? He has a new job, in a new town, and a new lease. And when he almost runs over his hot neighbor, Linc, who happens to be his contractor? Well, based on the explosive attraction between them, maybe he’ll find something new there too.

Linc’s been treading water ever since his wife passed away in childbirth, focusing all of his energy on raising his son, Beckett. The obvious solution? He needs to get the hell out of Chesapeake City. But when Nate charmingly fumbles his way into Linc’s life, he finds his defenses lowering for the first time in years. One date leads to another, and hell, this man makes him feel in ways he’d forgotten.

Even though Nate just finished piecing his heart back together, he falls fast. Yet Linc’s made it clear he’s a bad bet. The man hasn’t clicked with anyone since his wife, and if Nate ends up being “not enough” again, that won’t shatter just his heart—the fragile home he’s trying to build in this town will crumble too.

To celebrate the release of Stronger Than Passion, Katherine is giving away a $10 Amazon Gift Card to one lucky winner!

Enter the Rafflecopter giveaway for your chance to win! 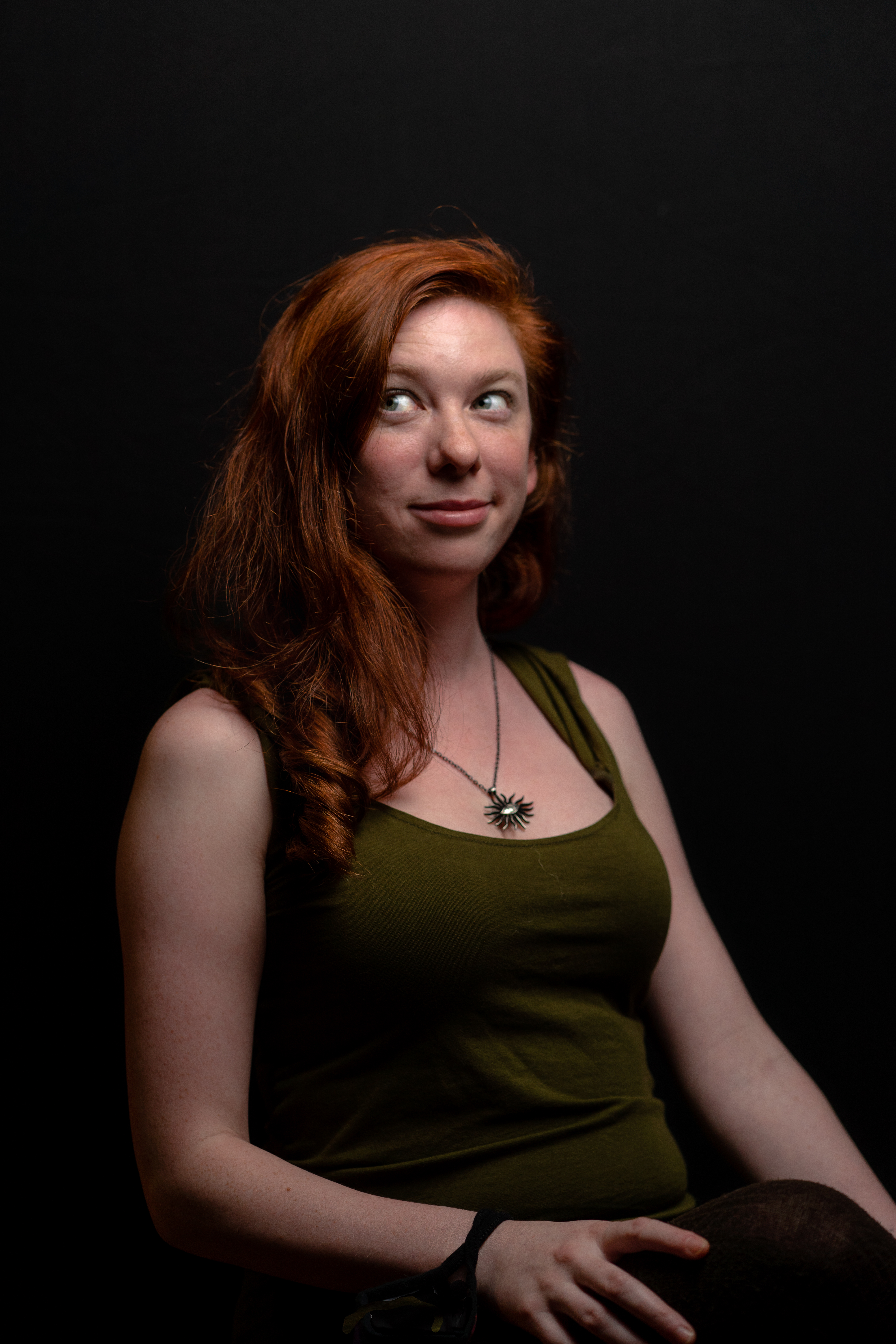 Katherine McIntyre is a feisty chick with a big attitude despite her short stature. She writes stories featuring snarky women, ragtag crews, and men with bad attitudes—and there’s an equally high chance for a passionate speech thrown into the mix. As an eternal geek and tomboy who’s always stepped to her own beat, she’s made it her mission to write stories that represent the broad spectrum of people out there, from different cultures and races to all varieties of men and women.

Want to be an active part of the ‘making of’ process? Join my FACEBOOK SQUAD

or sign up for my PATREON for exclusive freebie reads and all sorts of awesome perks!

Stronger Than Passion is a standalone MM romance in the Chesapeake Days series by Katherine McIntyre. This author is very quickly becoming one of my favorites, and I loved this one so much. A rivals to lovers romance with emotion and steam.

Hudson was this all-consuming force he couldn’t pull away from, no matter how hard he’d tried.

After an unpleasant first impression, Nico has firmly put Hudson West in the enemy category, no matter how attractive he is. They can’t cross paths without throwing barbs, so they try to stay out of each other’s paths. Which ends up being impossible when they are teamed up together as the main attraction for the Chesapeake Days festival. Both of their restaurants could really use the boost and extra income, so they can’t turn it down. The forced proximity just increases the sexual tension between them, and they actually start to enjoy each others company. But Hudson is looking for a relationship, while Nico only does one-night stands and runs from commitment. Will the connection they form be enough to keep them together for the long haul.

“You’re beautiful,” Nico murmured as he pressed his lips along the column of Hudson’s neck, delivering fever-sweet kisses that had him melting.

I have zero complaints for this book. The story line was enjoyable from start to finish. The conflicts and issues between the couple are right for them and not over the top. I Loved Nico! I Loved Hudson! Hudson’s family situation was disheartening, and I wanted nothing the best for him from the start because he deserved all the love. I adored Nico’s relationship with his brother and his mother, who was darling. I Loved all their snarky banter whenever they were around each other. Especially the fact that after they get together they continue with the barbs, but they are said with affection. They never stop being them once they form a relationship, and I really enjoyed that. I would have missed the verbal sparring if it had ended when they stopped being rivals. The sexual tension between them built and built and the moment it comes to a head was everything! The intimate scenes between them were *chefs kiss* They were so much more than their sexual connection though. Their relationship blooms from the understanding they have for each others busy schedules, the stress of being business owners and the mutual passion they have for what they do. Their relationship has the perfect balance of snark, emotion, and intimacy.

I simply loved reading Stronger Than Passion by Katherine McIntyre. A rivals to lovers romance with delicious steam, hot and heavy dancing at a night club, intimate creativity, and honest emotion. I’m really enjoying this series and can’t wait for the next book in the series.

Learning Curve by NR Walker is the 6th standalone in the multiauthor Franklin U series. A steamy jock/nerd college romance between Cobby and Vincent who will steal your heart. A feel good steamy romance with bisexual rep, weightlifting metaphors, first kisses, friendship, tacos on the pier, nervous rambling, honesty, study sessions, make out sessions, and a happily ever after.  5⭐
My Favorite Reads of September!  I'm calling it a wrap on the month because I plan to spend The day watching scary movies . 🍁
Finished up my reread of the Trails of Fear series by Nicky James and ending my month with the Perfect Boys series by #KMNeuhold . 💙
I was putting together my monthly wrap up last night and realized I read zero shifter romances and that makes me sad. I need to fix that and find a handful to read for next month. 🐺
Happy Release Day to The Rivals of Casper Road by @roanparrish 🎉 The fourth stand alone in the Garnet Run series . An opposites attract romance between horror fan Zachary Glass and his new easily spooked neighbor. A sweet fall romance filled with family video calls, a spooky hayride, pumpkin carving, chainsaw carvings and doing what will truly make you happy. 🎃
Hazard & Somerset took over my weekend once again but I'm almost done with that anxiety inducing series and will be immediately starting Black by #QuinPerin (thank you @enajunca for putting this on ym radar) .  I figured #CozySunday is the perfect time to do the #ComfortChallenge which I saw @boooksbythewater do. 📚